Our management processes, structures and policies help ensure compliance with laws and regulations, and provide clear lines of sight for decision-making and accountability. 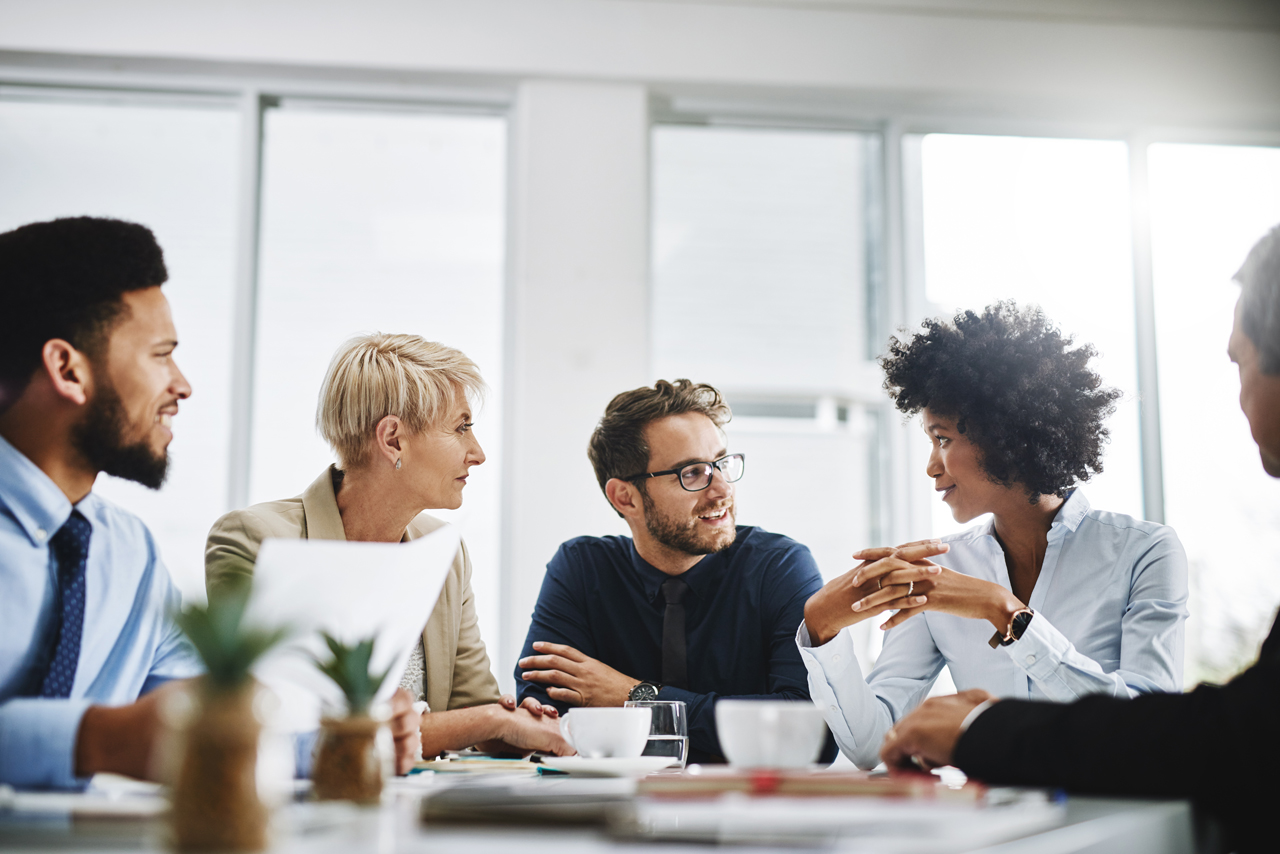 Encore is committed to exercising sound principles of corporate governance.

We believe this is in the best long-term interest of our stockholders.

To achieve this, the Board maintains four standing committees: the Audit Committee, the Nominating and Corporate Governance Committee, the Compensation Committee, and the Risk Committee. We have a Code of Ethics that provides a framework for operating standards and ethics at Encore outlining what we expect of all our officers, directors and employees.

Mr. Monaco has served as a director since August 2014. He served as a Senior Advisor to FTI Consulting, Inc. from July 2017 to April 2018. He served as the Senior Managing Director at CDG Group, LLC, a New York-based firm specializing in restructurings, mergers and acquisitions and crisis and turnaround management from 2002 until CDG Group, LLC was acquired by FTI Consulting, Inc. in July 2017. He previously served as Chairman and Chief Executive Officer of Accelerator, LLC, a provider of outsource services, from 2000 to 2002. He served as a Vice Chairman of Cendant Corporation from 1996 to 2000. In addition, Mr. Monaco served as the Executive Vice President and Chief Financial Officer of the American Express Company from 1990 to 1996. He was previously a director of iPayment, Inc., a leader in the payment processing industry, and the International Securities Exchange. Mr. Monaco also previously served as a director of I.D. Systems, Inc., a publicly traded company, from 2002 to June 2014. Mr. Monaco is also a Certified Public Accountant. His additional qualifications to serve on the Board include experience in public company accounting, risk management, disclosure, and financial system management, leadership experience in the financial services industry, and service as a public company director.

Mr. Gupta has served as a director since September 2015. Mr. Gupta retired from American Express Company in March 2018 after 40 continuous years of service as an executive officer, including serving as President – Global Credit Risk & Information Management from 2016 to 2018. Previously, he was the company’s Chief Risk Officer and was instrumental in successfully guiding American Express through the Great Recession. He is currently, a board member and chair for Corridor Platforms Inc., and a board member for Nova Credit and Tomo Credit. In addition, he is an advisor to Nexus Venture Partners and global consulting firm Oliver Wyman. Mr. Gupta earned an MBA from Columbia University and a bachelor’s degree in Engineering from Indian Institute of Technology (IIT), Delhi. He serves on the non-profit boards of Big Brothers Big Sisters of New York and the New York Chapter of National Association of Corporate Directors (NACD) and on the advisory board of South Asian Youth Action (SAYA!). Mr. Gupta’s qualifications to serve on the Board include his significant experience as an executive officer of a public international finance company and his experience related to risk and information management.

Ms. Hannam has served as a director since September 2015. Ms. Hannam retired from Scotiabank, an international Canadian bank and a leading financial services provider in North America, Latin America and parts of Asia, in 2014. Ms. Hannam joined Scotiabank in 1983 and held positions of increasing responsibility, most recently as Executive Vice President, International Retail Banking from 2009 to 2012 and Executive Vice President, Latin America from 2012 until she retired. Ms. Hannam holds an MBA from the University of Toronto. She is also a graduate of the Advanced Management Programme at the European Institute of Business (INSEAD) and the ICD-Rotman Directors Education Program. She serves on the Independent Review Committee of BMO Asset Management Inc, and on the board of the Royal Conservatory of Music. Ms. Hannam was named one of Canada’s 100 Most Powerful Women 2007-2010 and was named to the Latinvex Top 100 Business Women in Latin America in 2013. Ms. Hannam’s qualifications to serve on the Board include her substantial experience in international financial services and operations in regulated industries.

Mr. Hilzinger has served as a director since September 2019. He has served as Chief Executive Officer, President and as a director of Marlin Business Services Corp., a publicly-traded bank holding company, since June 2016. From 2010 to May 2016 Mr. Hilzinger served in positions of increasing responsibility at Everbank Commercial Finance, Inc., most recently as President. In 2004, Mr. Hilzinger co-founded US Express Leasing, Inc. and served as its Chief Financial Officer until it was acquired by Everbank Financial Corporation in 2010. Mr. Hilzinger co-founded Aternus Partners, LLC, a management consulting firm, and served as a Managing Director until 2004. From 1979 until it was acquired by GE Capital in 2002, Mr. Hilzinger served in various regional and global leadership roles with Heller Financial, Inc. and certain of its subsidiaries and affiliates. Mr. Hilzinger’s qualifications to serve on the Board include his experience as the Chief Executive Officer of a publicly-traded company, his substantial experience in the financial services industry, his experience interacting with regulatory authorities and his experience leading businesses located outside of the United States.

Ms. Knight has served as a director since September 2019. Ms. Knight has been the Senior Independent Director for TP ICAP plc (previously Tullett Prebon) since September 2011 and a Non-Executive Director of Arbuthnot Latham & Co Ltd since June 2016, of Taylor Wimpey plc since November 2016, and of Provident Financial plc since August 2018. She is currently the deputy chairman of the Astana Financial Services Authority, the new regulator being set up by the Kazakhstan Government, under English law and UK/international regulatory standards. Since 1997 Ms. Knight has held several Non-Executive Directorships, including Brewin Dolphin plc from 2007 to 2017, where she was the Senior Independent Non-Executive Director and also chaired the Dublin subsidiary, until December 2018 and was the Chairman of the UK Treasury sponsored body, the Office of Tax Simplification, until March 2019. She was the Chief Executive Officer of Energy UK from 2012 to 2014, and prior to that was the Chief Executive Officer of the British Bankers’ Association, from 2007 to 2012. Between 1997 and 2006 Ms. Knight was the Chief Executive Officer of the Association of Private Client Investment Managers and Stockbrokers. Ms. Knight started her career at Air Products and Chemicals where she worked for five years, primarily as a development engineer and project leader. In 1977 she set up Cook & Knight (Metallurgical Processors) and was Joint Managing Director until the company was sold in 1988. She became a member of Sheffield City Council in 1987 and was elected as the Member of Parliament for Erewash in the East Midlands in 1992. She was the Parliamentary Aid to the Minister for Industry in 1993, then to the Chancellor of the Exchequer in 1994, before becoming Economic Secretary to HM Treasury from 1995 to 1997. Ms. Knight has a BSc degree in Chemistry from Bristol University. Ms. Knight’s qualifications to serve on the Board include her substantial experience in international financial services, operations in regulated industries and service on international boards.

Mr. Masih has served as a director and our President and Chief Executive Officer since June 2017. He had previously served as Executive Vice President and President of Midland Credit Management from November 2016 until June 2017, Executive Vice President, U.S. Debt Purchasing and Operations from February 2014 until November 2016 and Senior Vice President, Legal Collections Operations from 2010 until February 2014. Mr. Masih joined the Company in 2009, serving as Senior Vice President, Corporate Development. From 2001 until joining the Company, Mr. Masih was employed at Capital One Financial Corporation where he held senior roles in the Collections & Recoveries functions in the credit card business and was also chief financial officer and head of analytics for a business unit of Capital One. Prior to joining Capital One, Mr. Masih was an Associate Principal at McKinsey & Company and a Manager at KPMG Consulting. Mr. Masih earned an MBA from The Wharton School of the University of Pennsylvania, a Master of Science in Manufacturing Systems Engineering from Lehigh University and a bachelor’s degree in Mechanical Engineering from the Indian Institute of Technology, New Delhi, India.

Ms. Olle has served as a director since February 2014. Ms. Olle retired from Capital One Financial Corporation, a publicly traded bank holding company specializing in credit cards, home loans, auto loans, banking and savings products, in 2007, where she served as Chief Enterprise Risk Officer. She joined Capital One in 1999 as Senior Vice President of Information Technology Systems Development. Prior to Capital One, Ms. Olle served as Senior Vice President of Information Systems and Services at Freddie Mac. She has also previously held key information technology positions at the Marriott Corporation and worked as a management consultant at Arthur Young and Company. Ms. Olle serves as a board member of Morgan Stanley Bank, N.A. (MSBNA), Morgan Stanley Private Bank (MSPBNA), E*Trade Bank, and E*Trade Savings Bank, which are bank operating subsidiaries of Morgan Stanley. Ms. Olle is a former Certified Public Accountant. Ms. Olle’s qualifications to serve on the Board include her broad experience interacting with regulatory authorities and developing and overseeing enterprise risk management and information technology programs at complex financial institutions.

Mr. Stovsky has served as a director since August 2018.  Mr. Stovsky retired from PricewaterhouseCoopers LLP in June 2018.  Mr. Stovsky joined PwC in August 1983, and held positions of increasing responsibility, most recently as a Vice Chairman.  Mr. Stovsky has served as a member of the board, audit and compliance committee and compensation committee of Olympic Steel, Inc. since May 2020.  Mr. Stovsky also serves on several non-profit organization Boards of Directors/Trustees including The Cleveland Orchestra, The 50 Club of Cleveland Executive Committee, The Cleveland Museum of Art Executive Committee, Bluecoats of Cuyahoga County Executive Committee and University School.   Mr. Stovsky is a Certified Public Accountant and is licensed to practice law in the state of Ohio.  Mr. Stovsky’s qualifications to serve on the Board include his experience as a certified public accountant, and his substantial experience in providing tax and overall business advice in a variety of industries.